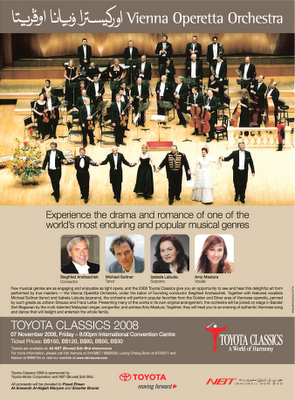 Peter and I bought tickets to this year's Toyota Classics at the CCP on the first day the ads came out in the papers over a month ago, thinking that because they usually have really special performers in the last 20 years, the tickets would be sold out in pretty quickly. Of course we were wrong. There were rows and rows of empty seats, which is good if you want space for your grocery bags but not great if you're one of the beneficiaries of the fundraiser. During the intermission they handed out three oversized checques to the Environmental Studies Institute of MIriam College, Mariano Marcos State University and the Philippine National Red Cross but I can't remember if it was a million each or between the three.

The concert was excellent. I've never seen an operetta before, and it's not quite a mini opera at all. The orchestra sounded great, and they give the impression that they've been doing it for decades. The soprano was a true diva, the tenor sounded like he got lost once or twice during the arias. Mind you, they were very good overall, but during one of the pieces I started wishing that they'd disappear. The orchestra would be excellent on its own. Oh well.

The best part was the program. Luckily it was free, because it's really an ad for Toyota with a few messages from their executives (and their corresponding grim pictures) and a couple of hilarious lines, and I quote:

"HOW TO ENJOY CLASSICAL MUSIC CONCERTS

At the end of the program, the conductor and soloist usually return to the stage several times, while the audience continues to show their appreciation by applauding. If the audience applauds very enthusiastically, the orchestra may give a brief encore performance."
Translation: Don't show the Austrians your ignorance of classical music by hooting or not applauding.

Then Julia Duncan came on. Double hmmm. I read her brief write up in the program which I must admit raised a little overgrown eyebrow. Observe: "As a bright new star in the musical firmament, Julia is delighted that people are at last seeing past the fashion-model glamour of her sultry beauty, and her discovering the deep reserves of musical talent in her voice and heart." Tsk tsk. Are people allowed to say things like that? You can almost see her sending her eyeballs into orbit and gesticulating in relief: "I told you I'm not just beautiful, I'm also very talented!" 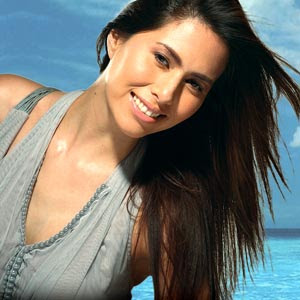 Well, she didn't belong there, poor thing. It was a waste of a perfectly good orchestra, as one concert goer put it. She sang two songs, the second one being Anita Baker's Sweet Love. Her style, Latin Chill (her words), left us cold. And a few people from our section walked out in the middle of her song. It just wasn't good enough. Sorry, I'm sure she's a perfectly nice, gorgeous person. We just didn't get it. I'm not sure if there was a problem with the sound system, or we were sitting at an awkward angle from the stage and the sound wasn't getting to us properly, but she sounded like she was auditioning for Pinoy Idol, and even if I didn't watch that stupid show I'm pretty sure she won't make the cut with that voice.

I left while she was getting her desultory applause. I thought, well, why ruin a perfectly good performance from the orchestra. As I was heading towards the lobby, I heard the orchestra from the PA give a lively, waltzy encore which got the remaining audience members' interest back. That took care of the funny aftertaste we almost left with.

Kwento ni cheneleen at 6:44 am