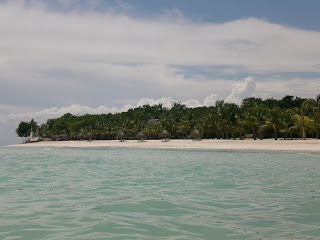 Peter and I found a really good deal for a return flight to Tagbilaran (Cebu Pacific PhP 6000 return for two) so we decided to go to Panglao Island. Never been there before but heard how amazing the diving is so it had always been on top of my list. Were going to stay for a week, but didn't really know where to setup camp so I asked our friend Hans for recommendations and ended up on Dumaluan Beach, Panglao's premiere destination for terminally boring travelers. I couldn't decide if it was the surly staff or the dead silence, but the place reminded me of Ortigas Home Depot, sans the fun bits of electrical supplies and things one screws on.

On our first evening, we decided to eat local: Dumaluan Beach Resort 1 has a little kiosk behind several cottages where they grill marinated meats and "fresh" seafood. By "fresh" they meant just defrosted. I asked the guy behind the counter what food they have and he grudgingly pointed to two plastic shoeboxes containing month-old porkchops in soy sauce. Asked whether they have seafood on offer, he gave me a look which said, "What have I done to deserve this?" That pretty much summed up our three days in Dumaluan Beach Resort 1. 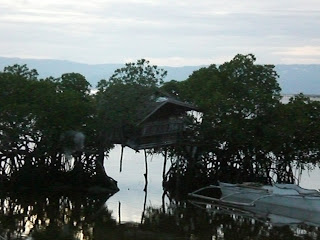 Wise words: Avoid that pointless dump unless you want to experience anger and resentment on your holiday. Go to Alona Beach instead.

Ooops Bar and Cottages in Alona Beach was fun! And at PhP 900 for a cottage per day it's a bargain. Great food, fun staff, and the security guard moonlights as a motorbike rental agency. PhP 50 per hour (Dumaluan Beach Resort PhP 250 for the first hour, PhP 100 for each succeeding hour). Diving in Panglao is actually quite cheap. Genesis Divers offers two dives and full equipment rental for US$53, a steal compared to almost US$100 in most dive spots in the country. Balicasag Island, about 25 minutes off Panglao by motorboat, was the best place to dive, I was told. Not very impressive corals, crazyfuck scary schools of jackfish and barracudas which have a very disconcerting look when they see divers. They follow you with their eyes as if thinking, "Should we have a little nip?" Saw huge sea turtles and clownfish. We did two spots: Black Forest (slope) and Diver's Heaven (wall). Definitely worth doing if one can't afford Coron. Personally, I prefer wrecks, looking like one myself.

Did a few daytrips to the Bohol Bee Farm where we had one of the best Seafood Pasta in Coconut Milk and Squash Muffins (ask me for the recipes). Went to the Hinagdanan Cave, which smelled like the Panglao Island Urinal. We went to the Loboc River Cruise stop and decided that it's not really fun to get on a boat which goes up and down a muddy river, especially when we have to pay for it. To our surprise, signs which read SEE A TARSIER HERE point to shops which have a few pots of plants with sleepy looking tarsiers on their branches. 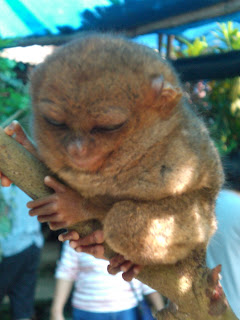 I expected a mini rainforest where tarsiers jump from one tree to another, but they decided to make it easier for tourists by having them in places where one might stop for a pee. They had boxes nailed on the posts with "Donation for feeding tarsiers" written on them, and I dropped two pesos, thinking the world's smallest primates most probably don't eat much.

On our last day we decided to drive to the Panglao Island Nature Resort and Spa, and it was well worth it. Daytrips cost PhP300 per person, PhP100 of which is for facilities rental (infinity pool!!! pool bar!!! billiards!!!), and the remaining PhP200 is consumable. Food ok, drinks cheap. All in all, quite a good deal.

Will I go back to Panglao? Sure, but if Palawan is the other option, I'd gladly go to Coron instead. Peter actually started thinking of buying property on Panglao, and to date I am still trying to convince him that perhaps it's not the wisest thing to do. He's convinced that he knows a bargain when he sees one. Oh well.

Tip: If you're going to Panglao, just outside the airport in Tagbilaran you can either hire a private car or taxi to take you to your resort (PhP350-450, haggle). If you're feeling touristy, tricycles will drive you there for about PhP200. Stay in a cheap resort, spend your day at the expensive ones. They don't charge much for the use of their facilities and you get to do it properly with poolside bars and deck chairs. 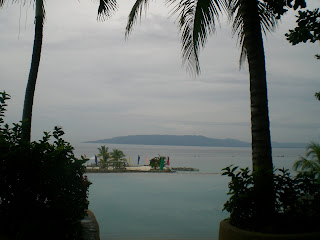 Best grill: The one just outside Oasis Bar. Superb grilled veggies and sirloin.

Best English food and drinks: Ooops Bar. They have pies and mash. Other items on the menu are also reasonably priced and the portions are big. Staff very very friendly, except that during breakfast they constantly played Sitti, which intially is innocuous enough, then after a couple of songs you realise that it's an entire album with all the songs sharing the same rhythm, kind of like those cheap casette tapes they used to play in jeepneys when I was in high school. I simply cannot stand Sitti.